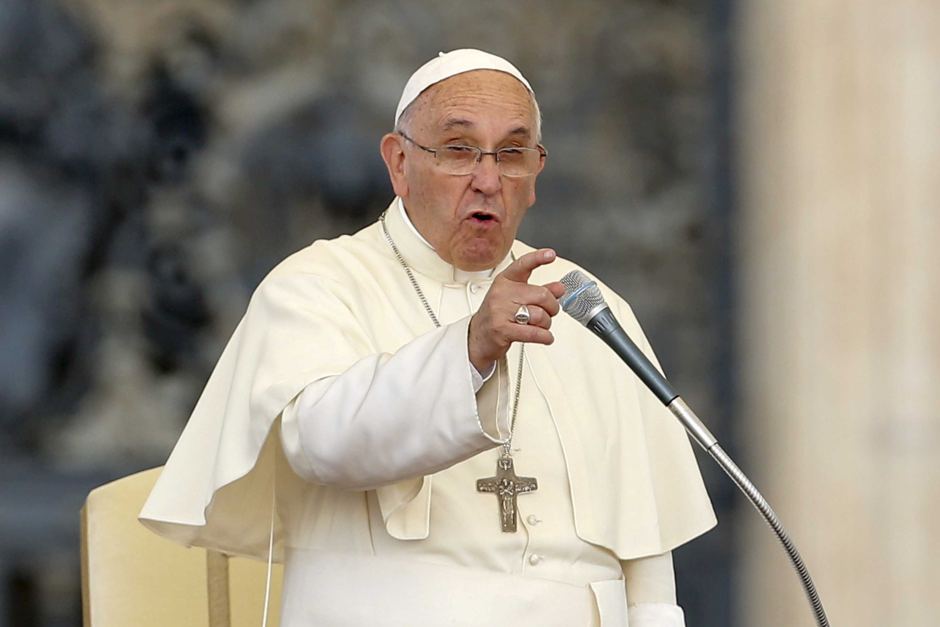 The Pope has issued a call for the world to act quickly to prevent climate change from destroying the planet, saying the Earth is starting to resemble “an immense pile of filth”.

In the first papal document, or encyclical, dedicated to the environment, Pope Francis demanded swift action on Thursday to head off what he sees as looming environmental ruin, and urged world leaders to hear “the cry of the Earth and the cry of the poor.”

He called for “decisive action, here and now”, to stop environmental degradation and global warming, squarely backing scientists who say it is mostly man-made.

Arguing environmental damage was intimately linked to global inequality, he said doomsday predictions could no longer be dismissed and “the Earth, our home, is beginning to look more and more like an immense pile of filth”.

In the encyclical, titled Laudato Si (Praise Be), On the Care of Our Common Home, Francis advocated a change of lifestyle in rich countries steeped in a “throwaway” consumer culture and an end to an “obstructionist attitudes” that sometimes put profit before the common good.

He also took on big business, appearing to back “what consumer movements accomplish by boycotting certain products” in order to force companies to respect the environment.

The encyclical left no doubt that the ponitff believed the world was on a fast-track to disaster after decades of inaction.

“If present trends continue, this century may well witness extraordinary climate change and an unprecedented destruction of ecosystems, with serious consequences for all of us,” he wrote.

Bemoaning the “remarkable” weakness of political responses to this, Pope Francis accused sceptics of cynically ignoring or manipulating the scientific evidence.

“There are too many special interests, and economic interests easily end up trumping the common good and manipulating information so that their own plans will not be affected,” he wrote.

“We know how unsustainable is the behaviour of those who constantly consume and destroy, while others are not yet able to live in a way worthy of their human dignity,” he added, saying the time had come for parts of the world to accept decreased growth.

The Pope said fossil fuel-based technology needed to be “progressively replaced without delay”.

Developing countries would need financial help to do this from “countries which have experienced great growth at the cost of the ongoing pollution of the planet” and this pact had to be enshrined in binding accords.

“I think the Pope has put it front and centre that climate change and the needs of our world have to be part of the program of all Catholics,” he told Lateline.

Archbishop Hart said he did not believe Pope Francis had crossed a line into politics.

“I think the message will gradually spread that we can’t just go ahead with the culture of waste, with allowing ourselves just to consume … and think of ourselves and not think of anyone else,” he said.

“And so from our pulpits these matters have to be put to people … that we are brothers and sisters, we have to care for our common home – the world.”

But Gerard Henderson, executive director of the Sydney Institute, said the Pope’s call put the church in a “fashionable position”.

“If you are going to decrease the living standards of people who are trying to get out of poverty in China and India, I don’t think this is a very smart way to do it,” he said.

Dr Paul Collins, a former Catholic priest and author, agreed the Pope was sending a clear message on the world’s obligation to tackle climate change.

“What the Pope is trying to get at here is that sin is not just about what individuals do. Sin is also about what communities and institutions do,” he said.

Green activists hailed the pontiff’s widely-trailed intervention as a potential game-changer in the debate over what causes global warming and how to reverse it.

“Everyone, whether religious or secular, can and must respond to this clarion call for bold urgent action,” Kumi Naido, the international executive director of Greenpeace, said.

“Climate change is no longer just a scientific issue; it is increasingly a moral and ethical one,” Yolanda Kakabadse, president of WWF, said.

“It affects the lives, livelihoods and rights of everyone, especially the poor, marginalised and most vulnerable communities.”

Christiana Figueres, head of the Bonn-based UN Climate Change Secretariat, said the encyclical provided a powerful impetus to governments to agree on a strong pact when they meet in Paris in November.

“This clarion call should guide the world towards a strong and durable universal climate agreement in Paris at the end of this year,” she said in a statement.

“When theological, political and scientific leaders all call for rapid decarbonisation of our global economy it must be time we finally listen and create a binding international climate change agreement,” he said.

But even before the encyclical’s official publication, climate change sceptics dismissed the document’s argument that the phenomenon is primarily man-made and that humanity can reverse it through lifestyle changes including the phasing-out of fossil fuels.

“I don’t get economic policy from my bishops or my cardinal or my Pope,” United States presidential candidate Jeb Bush said on the eve of the release in comments that underlined the depth of opposition in the country to a binding agreement to curb greenhouse gases.

The encyclical referenced the arguments of the sceptics by acknowledging that volcanic activity, variation in the Earth’s movements and the solar cycle are factors in climate change.

But it maintained that “most global warming in recent decades is due to the great concentration of greenhouse gases released mainly as a result of human activity”.