“In truth, we can say that the Pacific was the birthplace of the congregation”. 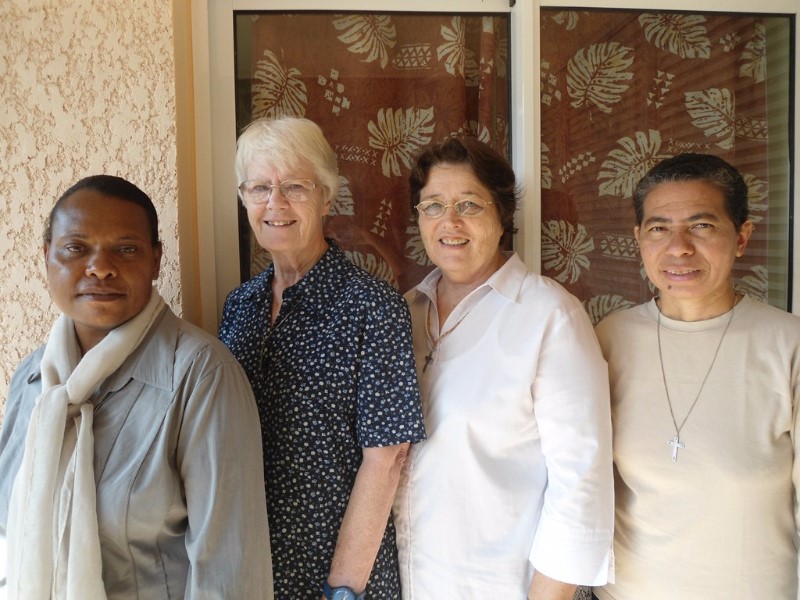 The Missionary Sisters of the Society of Mary have a long history of presence in the Pacific as accounted here by Janice Ruff smsm.

MISSIONARY SISTERS OF THE SOCIETY OF MARY

On October 25th 1846, Marie Françoise Perroton set foot on the island of Wallis in the South West Pacific after a voyage from France lasting eleven months.  Françoise had heard the call of the women of Ovea through a letter read in all the churches. Twelve years would elapse before she had other companions from France to work with her for peoples of the Pacific.

Françoise had been received as a Third Order of the Society of Mary member during the voyage from France.  Her only desire was ‘to serve on the mission fields for the rest of my life’. Françoise had no intention of being a foundress of a congregation and later was to remark that she was glad to have begun a movement. In 1858, Françoise was joined by three French women who were already members of the Third Order of Mary for the Missions of Oceania. Seven more women were to follow and were dispersed from New Caledonia in the west to Tonga in the east. Along the way they were joined by others, including young women from the Pacific. Not until 1880 did the fledgling group become the Third Order Regular of Mary with the Marist Fathers as their superiors.  In 1931, the congregation received Pontifical approval and became the Missionary Sisters of the Society of Mary. In truth, we can say that the Pacific was the birthplace of the congregation.

Today there are some forty-seven communities spread throughout Tonga, Samoa, Fiji, the Solomon Islands, New Caledonia, Vanuatu, Wallis, Futuna, Papua New Guinea, Bougainville, New Zealand, Australia and further west, in the Philippines and Bangladesh. It is precisely these connections to the Pacific that has led the congregation to be part of the Pacific Calling Partnership and the Pacific Climate Watch.

I myself have worked in Bougainville, East New Britain and Kiribati. I saw firsthand what happened when a high tide and a strong wind combined in Kiribati and watched hopelessly as the sea crept closer to the road, destroying the bread fruit trees which for years had fed the villagers with their fruit. I felt also for people further up the coast whose land/sand was being washed away but at the same time was being trapped by the mangroves in front of our property. This was twenty years ago and how much worse it is now.

One of our sisters who is presently working in Tanzania, is from the Caterets Islands in Papua New Guinea. She tells of returning to her island to bring her father back to Bougainville and seeing the salt water at high tide rise up through the gardens, ultimately destroying the ground food planted there. Coconut trees were dying but more so the hearts of the people who had lived there for generations and felt they were dying just as their beloved islands were disappearing and dying.

Sister Denise Mc Mahon smsm from Geelong in Victoria, has worked in Fiji for more than twenty years.  She has written a short account of cyclone Winston, the most powerful cyclone ever to hit landfall in the southern hemisphere. Winds of up to 300km an hour  caused absolute devastation.  The people worst affected will be impoverished for years to come….

”Cash crops such as yaqona take four years to mature and most didn’t survive the cyclone. Coconut trees take many years to grow. On some islands coconut and copra products were the only source of income. Sadly, many of the trees were devastated. This is at a time when the world demand for coconut products is the highest it has been for many years.

NEED TO RELOCATE VILLAGES IN FIJI.

The first of 34 villages forced to relocate from their coastal sites to further inland has begun as the sea increasingly encroaches on land, swallowing everything in its way, making its way in to freshwater sources and thus the saline water making it impossible to raise crops in numerous places. The effect on the water supply is also compounded by less rainfall, which is attributed to El Niño, the effects of which are intensified by global warming. The temperature of the sea has been raised and in recent times scores of dead fish and other marine life have been found washed up onto the shore.”